Colours have their own symbolism in cultures, religions and history. Black and white are, strictly speaking, not colours. However, light and dark play a major role in art and design and have various symbolic meanings. ‘Black & White | Symbolic Meaning in Art and Design’ presents works from the museum collection that show how contemporary artists and designers interpret the symbolic meaning of black and white. The exhibition features works by artists including Jorge Baldessari, Maria Roosen, Alet Pilon,Jeroen Eisinga, Marinus Boezem, Bart Hess, Célio Braga, Studio Formafantasma and Felieke van der Leest. 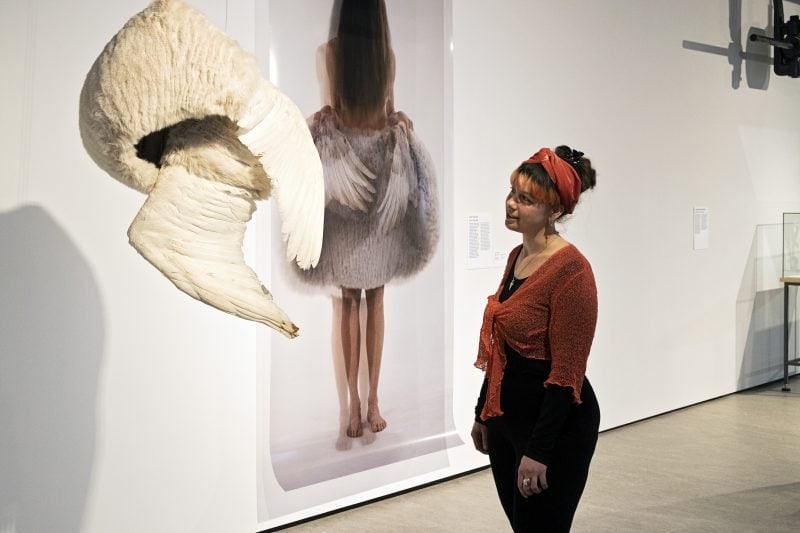 Wish I had 1 (Zwanenrok) – Alet Pilon

Opposites
Colours are wavelengths reflected by objects to the human eye. White is pure light and black is the absence of light. In many cultures, these two non-colours are associated with life and death rituals. For essential questions about identity, the opposites black and white are often chosen. In Marinus Boezem’s (*1934) installation ‘The absence of the artist’(1970), as well as in the oeuvre of the late Anna Verwey-Verschuure (1935-1980), black and white are used to address themes such as identity, presence and absence. Argentinian conceptual artist Jorge Baldessari (*1931) makes optimal use of the contrast between black and white in his embroidered poem ‘Tools’ (1994-95), a conversation with the divine creator who expelled mankind from paradise. In the more abstract works by Lam de Wolf (*1949) and Elke Lutgerink (*1982), black and white appear as both each other’s opposites and continuum. 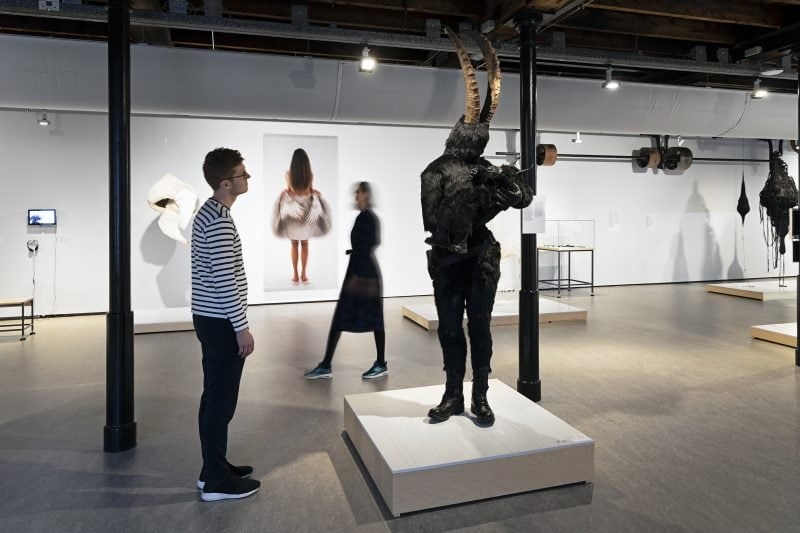 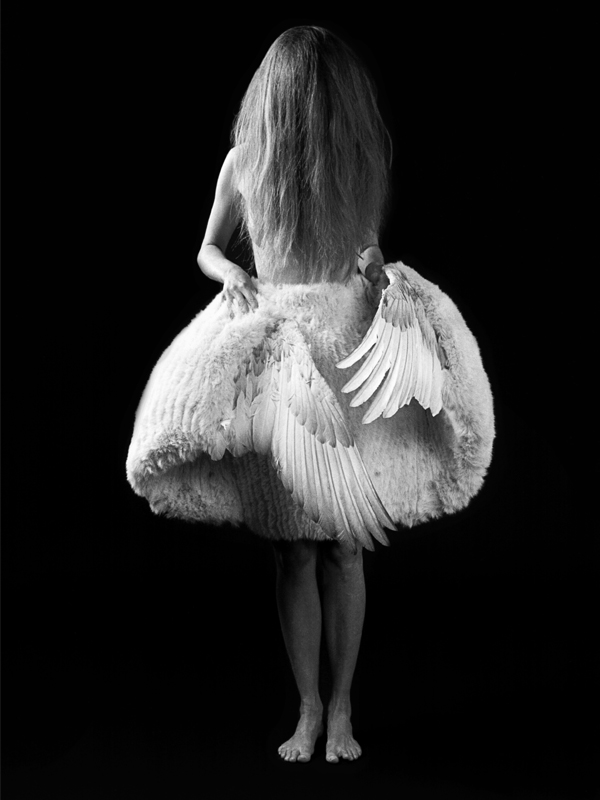 Wish I had 1 (Zwanenrok) - Alet Pilon 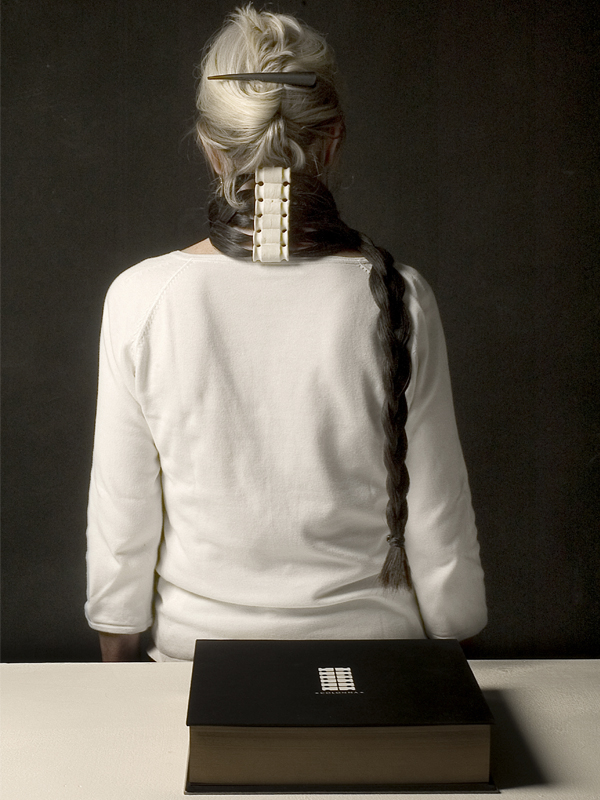 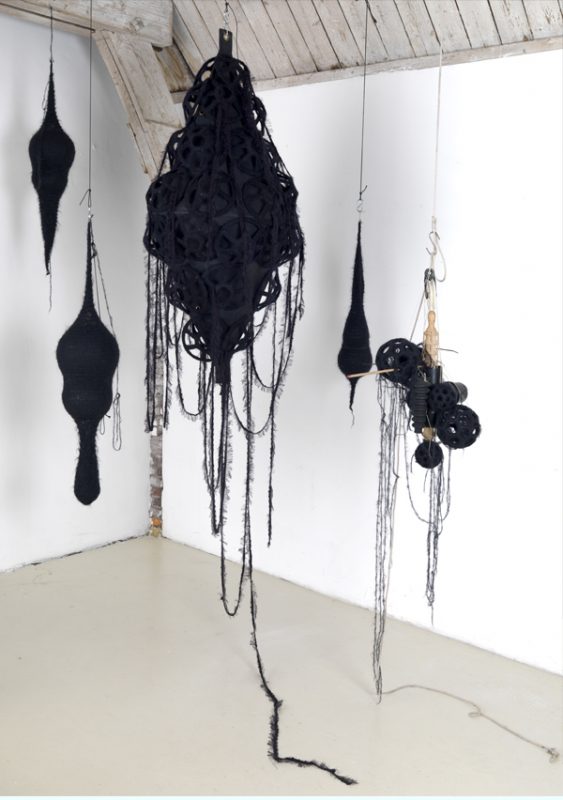 Innocence, purity, loyalty
In many cultures, white is seen as the colour of innocence and virginity, purity, loyalty and peace. In the West, white clothing and decoration are symbolic of the joy around births, baptisms and weddings. The colour is also associated with women as virgins, mothers and caregivers. These themes find a playful and poetic expression in the works by Regula Maria Müller (*1961), Maria Roosen (*1957) and Hinke Schreuders (*1969) and the jewellery by Felieke van der Leest (*1968), but they also examine female roles.

In many African and Asian cultures, as well as in medieval Europe, white is the traditional colour of death and mourning. In the West, meanwhile, black has symbolised mourning since the Renaissance. Miriam Verbeek (*1960) refers to these intercultural differences in her series of black and white mourning jewellery. White represents purity, holiness and eternity in religions including Christianity and Islam. Christian Bastiaans’ (*1951) ‘Madonna of Humility’ (2003) from the series Hurt Modelsreflects the Christian meaning of white as an expression of purity. However, the delicate sculpture made of iron wire and gauze primarily explores the vulnerability of human existence.

Artist Alet Pilon (*1949) also explores the symbolic connotations of black and white in her work and often gives it a surreal twist. Her white ‘ZT (Swan wings)’ from 1995 is a sculptural piece that can be worn around the shoulders. Her work evokes associations with the famous ballet piece of the dying swan and the fate of the mythical Greek hero Icarus. Icarus’ wings of swan feathers and wax melted when he flew too close to the sun. Pilon’s swan wings seem to be an echo of this shattered dream.

‘Colours are wavelengths reflected by objects to the human eye. White is pure light and black is the absence of light’ 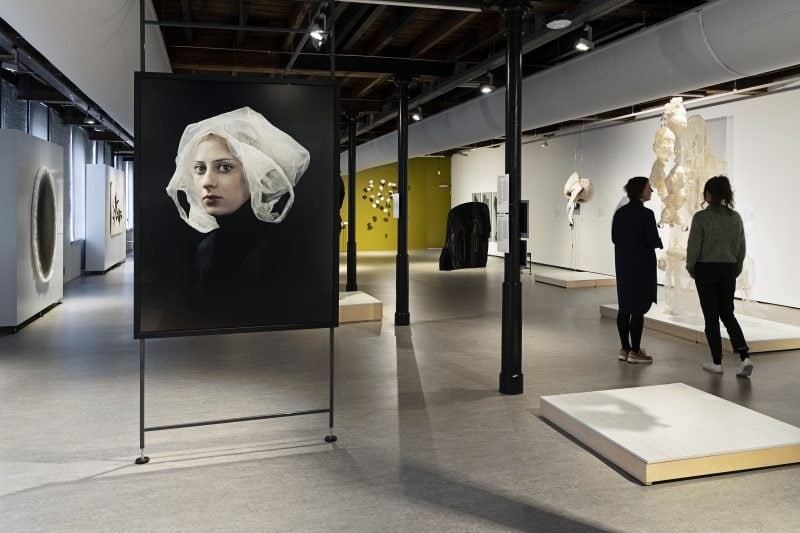 Death, mourning and the concealed
Black has different associations across cultures and religions: death, mystery and the darker side of human nature but also power, nobility and prestige. The works by Bart Hess (*1984) and Brazilian artist Célio Braga (*1963) subtly represent the hidden sensual side of humans. For his ‘Stimulus: cord reflexes, Subject B.M.’ (2016), Hess was inspired by the tactility of skin, and specifically the movement of testicles. He partly developed this interactive installation in the museum’s TextielLab. Braga’s objects from the Negros series are intense black shapes that refer to processes of death, mourning and transformation. A fascinating sculpture that defies traditional representation is Pilon’s ‘Black Madonna’ (2018): a dark, hairy half human, half animal dressed in tough black gloves and boots with a holster slung around her waist. At the same time, she tenderly holds her child in her arms in a symbol of maternal care.

From 29 March 2019, come and surround yourself with the serenity of the works in ‘Black & White | Symbolic Meaning in Art and Design.