At the start of the 20th century producers ov synthetical dyes became trendforcasters of fashion colours. At the same time in Paris offices were being set up to send sample books with the latest fashion fabrics. In the TextielMuseum we keep sample books from both types of companies. Read the fascinating story of the emergence of trend forecasting.

Second Industrial Revolution
Western economies changed so drastically between 1850 and 1950 that you can speak of a second industrial revolution. At the beginning of the 19th century Western industrial production was based on regions. These regions were producing the same specialized products for centuries. For example, in the Netherlands the production of cotton is centered around Enschede and the production of wool in / around Tilburg. The industry made products of high quality at a competitive price, but modern strategies to sell products, such as trend forecasting, marketing and advertising, were not yet developed. This changed around the 1920s. The industry deliberately created more demand for their products by introducing fashion trends. Color played an important role in this. 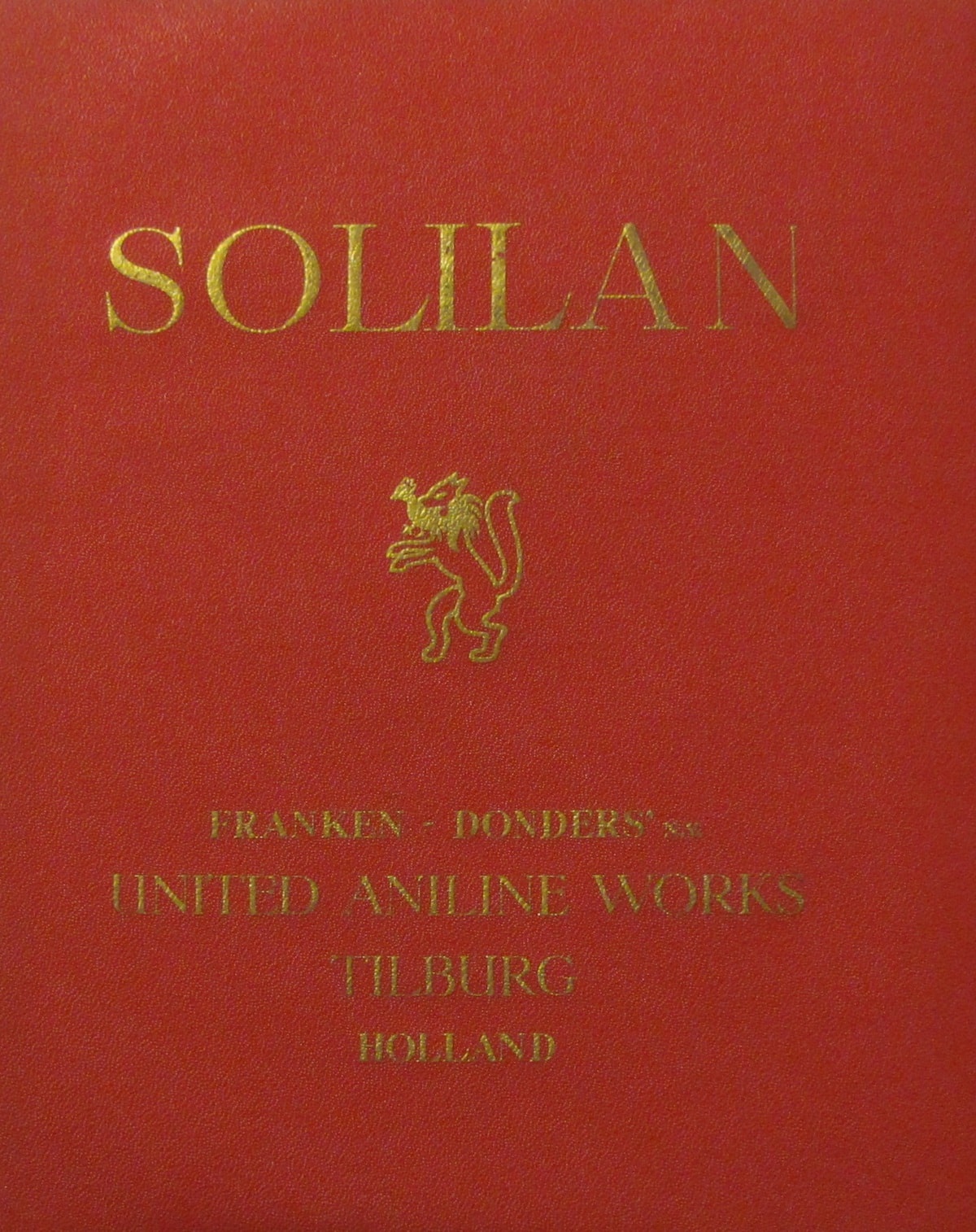 Innovation and marketing
During the second industrial revolution, the chemical industry developed. Until the 1860s textiles were dyed with natural dyes such as madder and indigo. Chemical companies in Germany and the U.S.A. started to invest heavily in innovation. Their laboratories produced many new products, including artificial dyes in almost every color. Technicians started these developments, but new ideas to sell these new dyes were needed. Especially in Germany the chemical companies became masters in marketing. The companies had a network of sales agents around the world. They discovered the local wishes of consumers and reported these back to the company. Companies adapted their products for the local markets in this way.

The sales agents of chemical companies used sample books to communicate about new trends with local consumers. The sample books were a beautifully designed visual communication tool to market the latest dyes.

The production of companies increased. In order to continue to produce efficiently, standards became important. sample books were a way to create standards in textiles. The sales agents used sample books with the colors that were produced on the local markets. A similar sample book with the same numbers was kept on site at the factory. Via telegram or mail, the representative could order the exact color for his local market. 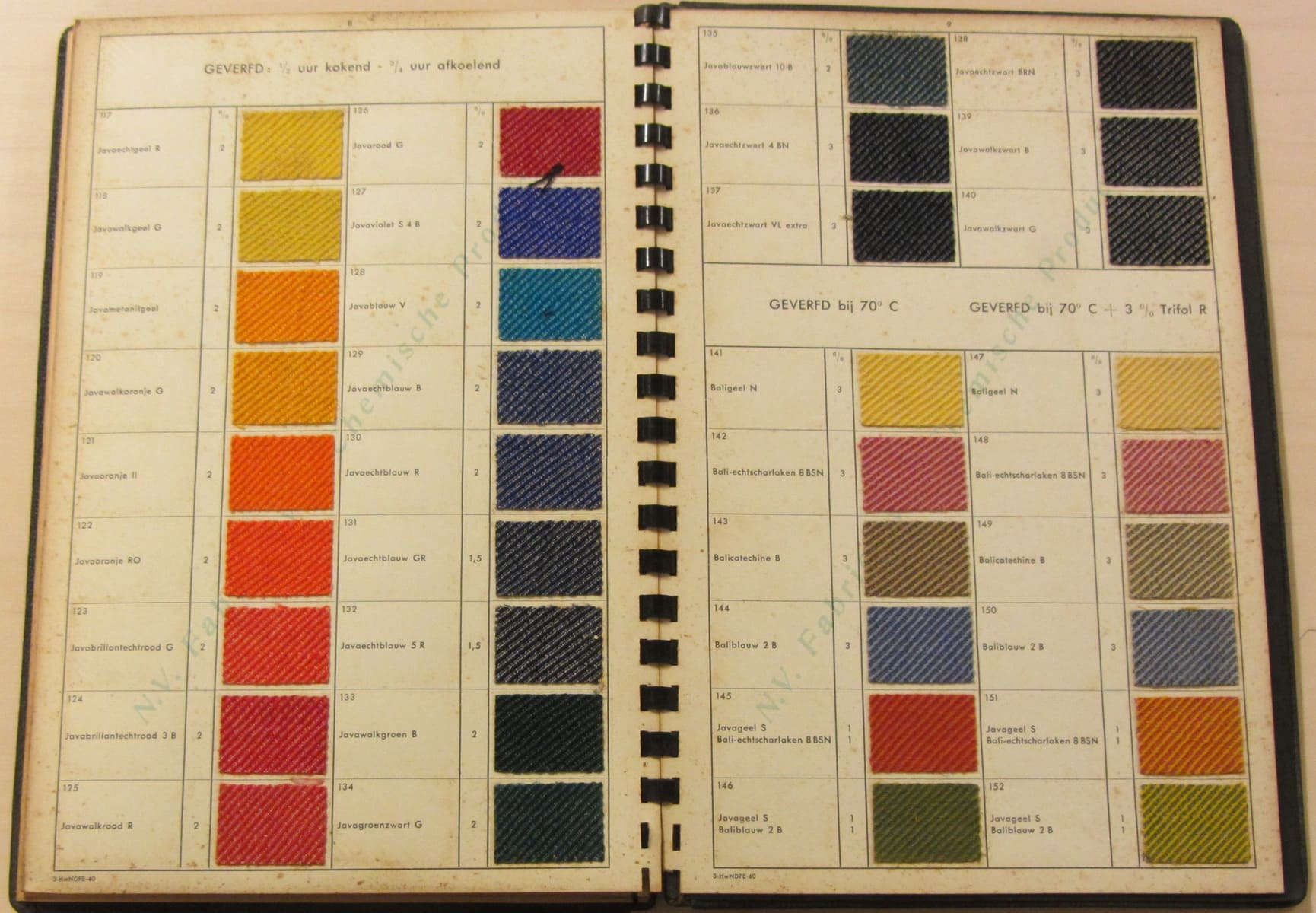 Using standards was not enough. To ensure the most efficient production with the least stock possible, predicting the future demand for a color was important. A new profession arose, the colourist. The industry formalized color by developing seasonal color charts. These color charts could be used for a range of products of different materials. Nice for the consumer because:

‘The consumer with an eye for color and detail had always matched her embroidered collar with the trim of her hat.’

But also handy for the producer, because standard color charts and seasonal predictions for color trends, made it easier to choose the right color buttons at another factory and to communicate with department store representatives.

The seasonal forecasts were a system with three components: 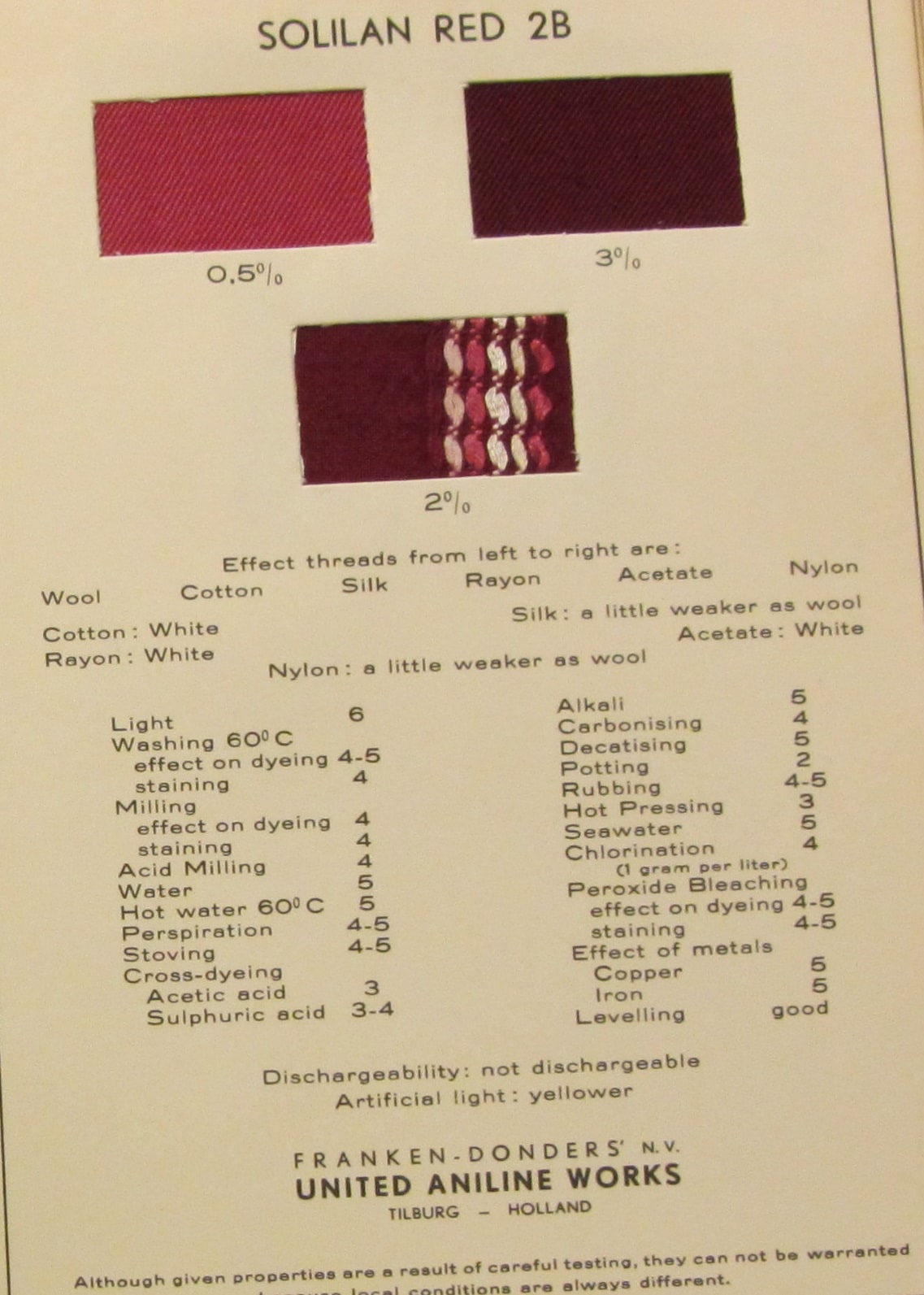 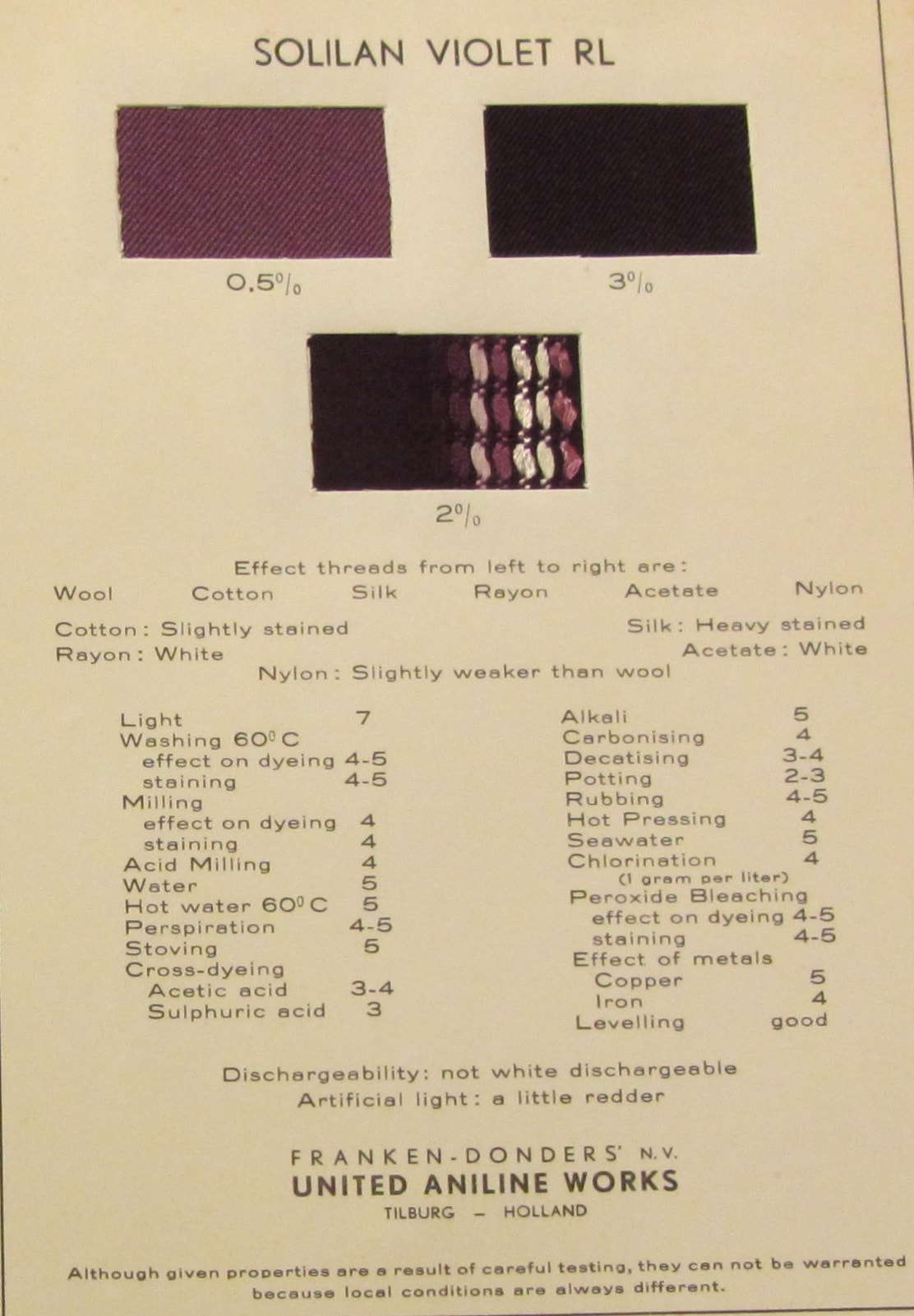 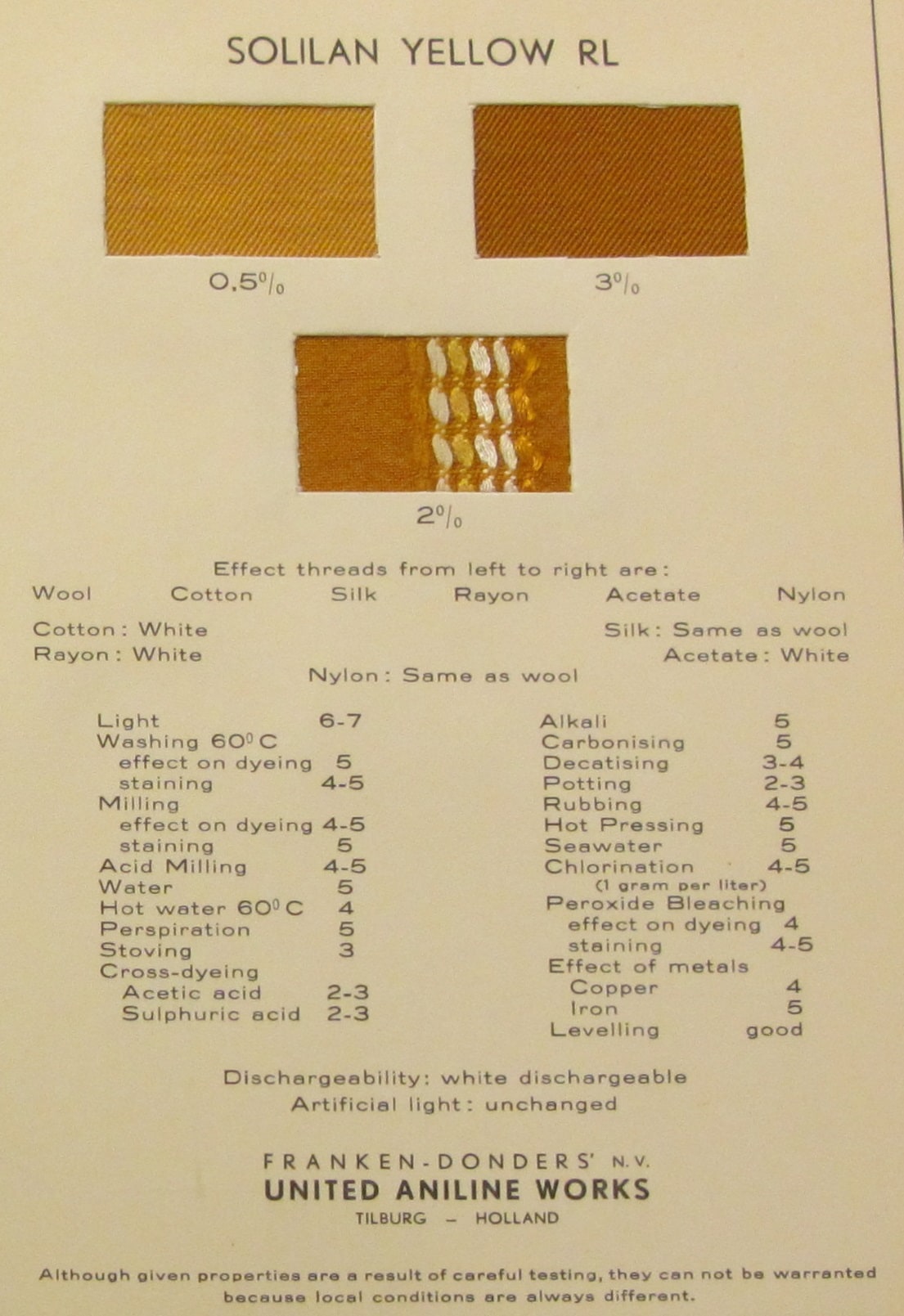 Sample books in the museum

The TextielMuseum has many color cards of the Dutch chemical industry in its collection, from companies such as:

Whether these companies deliberately created color trends or rather followed the developments in Germany and the US should be investigated.

At the beginning of the 19th century, Paris was the most important center for textile design. From all over Europe and North America textile entrepreneurs came to Paris for inspiration. From the 1930s, style services developed in Paris, companies that collected the latest textile samples and circulated them around the world. Subscriptions to this form are expensive, but it not as expensive as going to Paris and other places where new trends arose (also Berlin and Vienna at that time).

The collection of the library of the TextielMuseum proves that the Dutch textile industry had subscriptions to this form of service, . We have sample books from trend forecasters from France and Italy from the 1920s to the 1970s, such as: 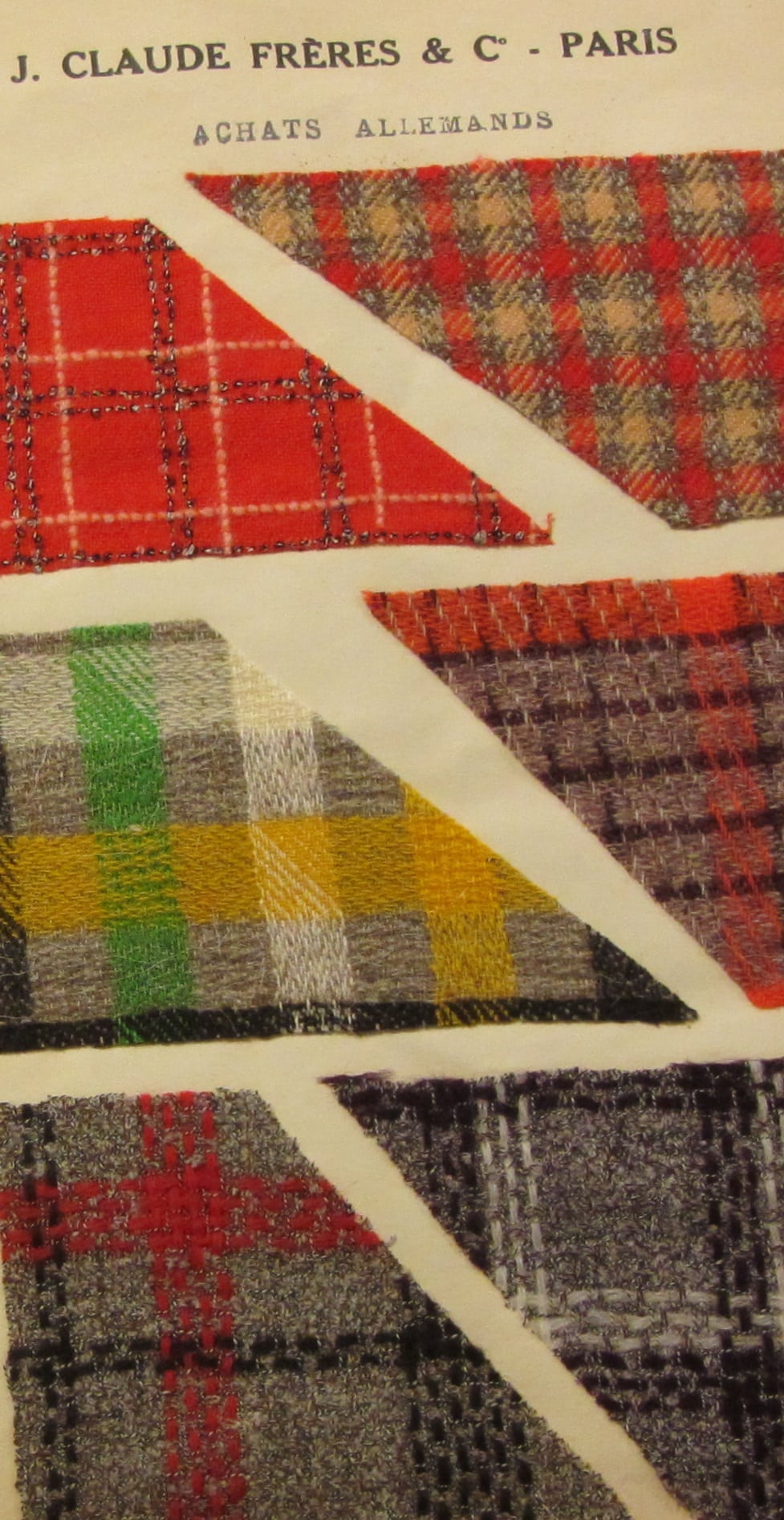 Before the color revolution, people wore colorful clothes and there were fashion trends. The patterns that were ‘in fashion’ already changed every six months in the 18th century. The scale on which fashion was produced and the speed of change did increase after the second industrial revolution.

This weblog is based on the presentation ‘P’ is for Pattern Book, ‘S’ is for Style Service by Regina Lee Blasczyk at the conference ‘A Universe of Patterns: Pattern Books in the Industrial Context of the 19th and 20th Century’ in St. Gallen on March 9 and 10, 2018. Regina Lee Blaszczyk wrote this book on the development of trend forecasting in the United States of America: Regina Lee Blaszczyk. The Color Revolution. London: MIT Press, 2012.