Colouring the past: Historical research into the 19th century dye recipe books

Colouring the past: Historical research into the 19th century dye recipe books

In the TextielMuseum’s library collection we keep hand written dye recipe books. Librarian Jantiene van Elk wanted to learn more about these manuscripts, their historical context, the contents of the dye recipes and the transnational history of the dyestuffs used in the recipes. By setting up a citizen science project, participants with different backgrounds and specialisations made the recipe books and their contents and context accessible.

First, the books were digitised by the Tilburg Regional Archives, so they can be viewed on a computer screen. Then, the sometimes difficult to read manuscripts were converted to readable, typed texts by volunteer transcribers connected to the Regional Archief Tilburg. A thorough (digital) content analysis of the dye recipes was carried out, and a number of recipes were tried out by a group of textile dyers. Moreover, all manuscripts were professionally restored by book restorer Mascha van den Hout.

At the same time, the digitised recipe books were subjected to historical research. This research was done by Zuzana Baakman (volunteer interested in old writing), Jantiene van Elk, Luuk Hillebrands (as a descendant of the Hillebrands family connected to one of the recipe books), Ernst Homburg (emeritus professor History of Science and Technology at Maastricht University), Nelleke Honcoop (Fashion and Textile historian), and Rob van Putten (connected to the Regionaal Archief Tilburg). The following questions were central to the study of the manuscripts: Who was the author and where did he come from? What kind of company was it? Why was the book made? Are there any other traces of use by the author? Are there any samples?

Studying the books: samples and traces of use

The dye recipe books from the library collection were written by hand and used in the textile industry as a guide and reference when dyeing textiles. The authors of the manuscripts were connected to the textile industry in places like Tilburg, Dinxperlo and Leiden. Some recipe books also originate from Belgium (Lier), Germany and France. The oldest book was written around 1700, and the most recent manuscript in 1973. 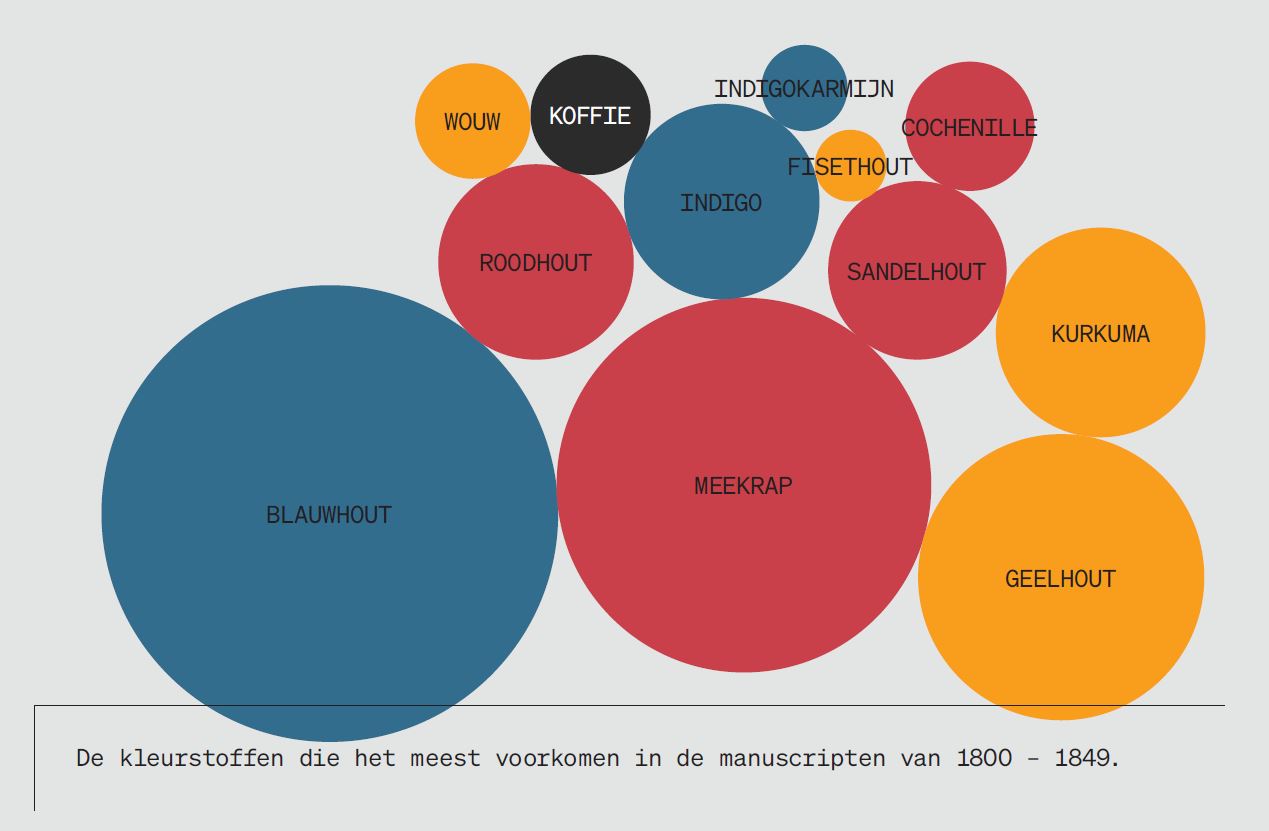 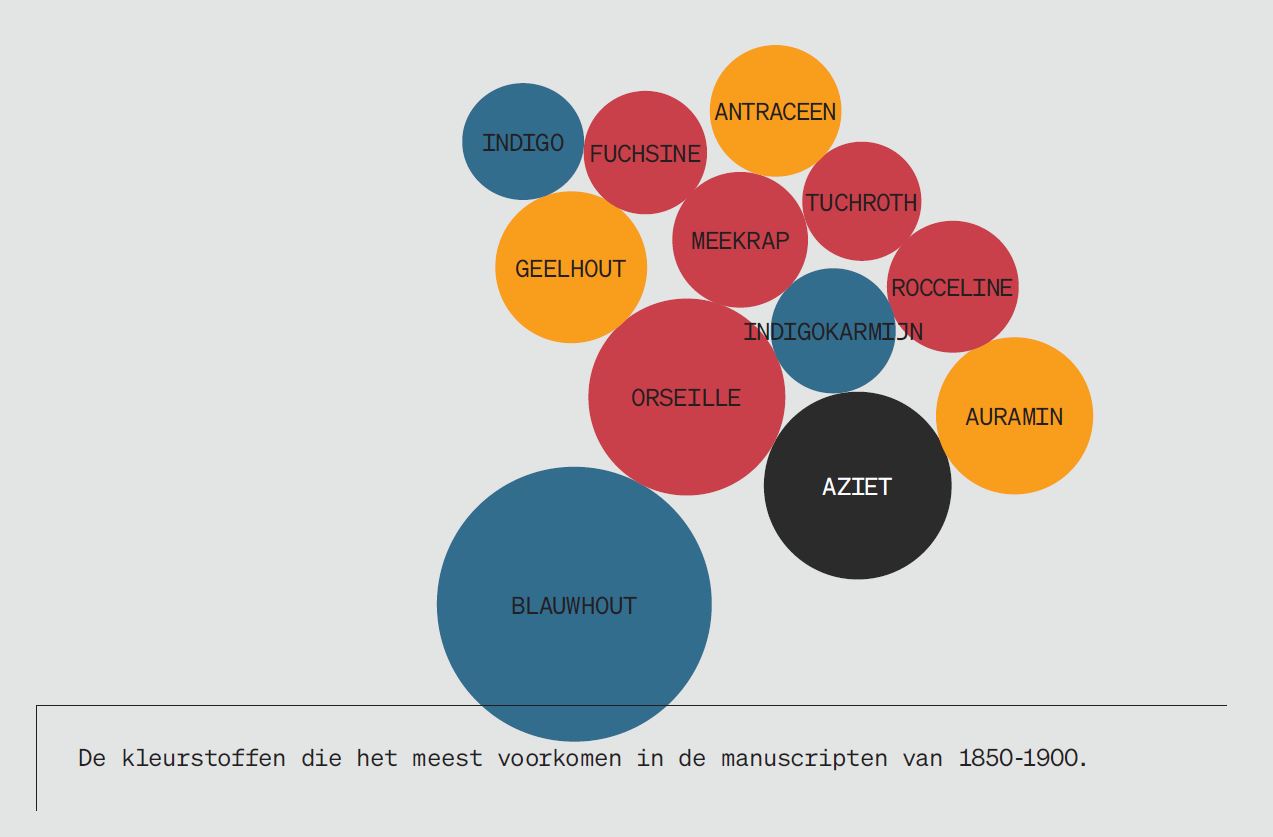 Some recipe books are also sample books: they contain small fragments (samples) of dyed loose wool or woven textile. The books vary in size and finish: from notebooks to beautifully bound books with leather covers. There are also traces of use, such as pigment and dye stains on the flyleaf and cover, and scribbled notes. 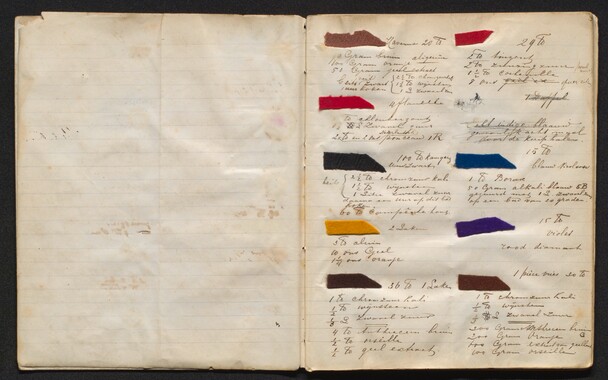 Photo: page from manuscript with dye recipes on wool samples (BTMM0092) from 1891 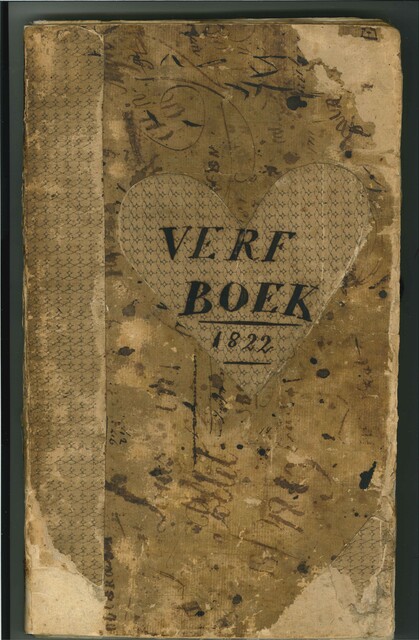 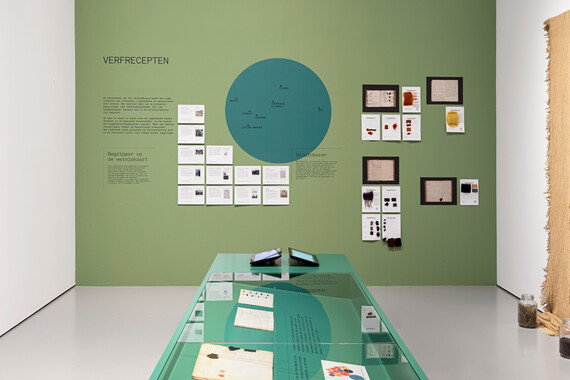 Photo: the exhibition room with the dye recipe books

Five manuscripts have been selected and can be seen in the exhibition ‘To Dye For‘. The oldest of these is Verfrecepten, written around 1800 in Groningen by the blue dyer Lucas Tiddens Hillebrands. The other four manuscripts are all connected to Tilburg. One is for example the Dye Book of Woollen Samples, written between 1830 and 1831 by one ‘F. Jellinghaus’. This could be Frans Jellinghaus, or his son Frederik Jellinghaus.

Father Frans Jellinghaus was born about 1782 in Lünen aan de Lippe in Germany, but settled in Tilburg in the early 19th century. After working as an accountant at a woollen fabrics factory, he founded the company ‘Jellinghaus, Diepen & Co.’ in 1808, together with Willem van Spaandonk and Jan Diepen. Jellinghaus and Diepen are co-owners of this woollen mill on the Korvelplein. 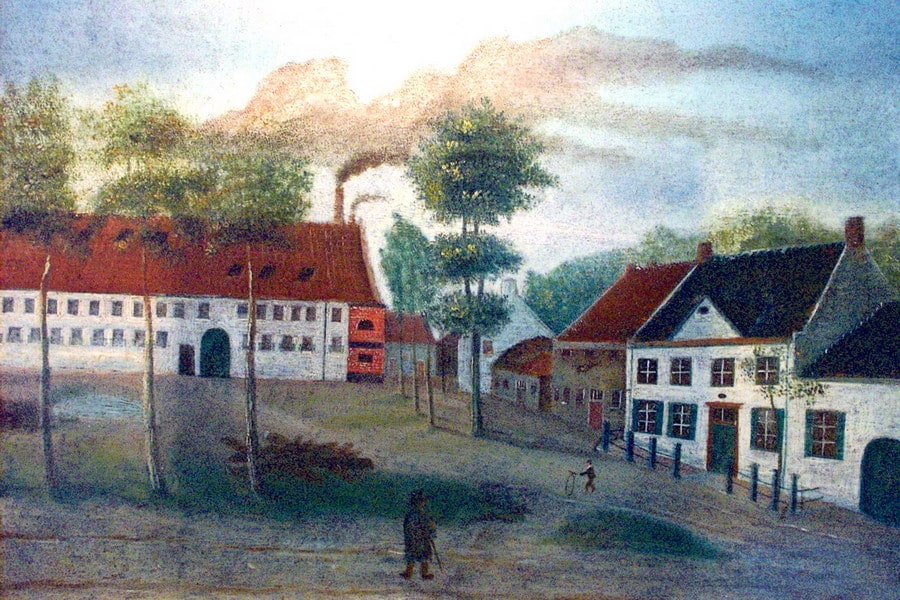 Photo: Rudolf Diepen (1875-1920) made this painting of the Diepen-Jellinghaus factory after an older image from around 1830. Private collection.

The factory was an important supplier of woollen textiles for army uniforms. Unfortunately we do not know what the factory looked like from the inside, but the print from the book De Verwer (The Dyer) by C. Boot gives an impression of a dyeing workplace at the beginning of the 19th century. 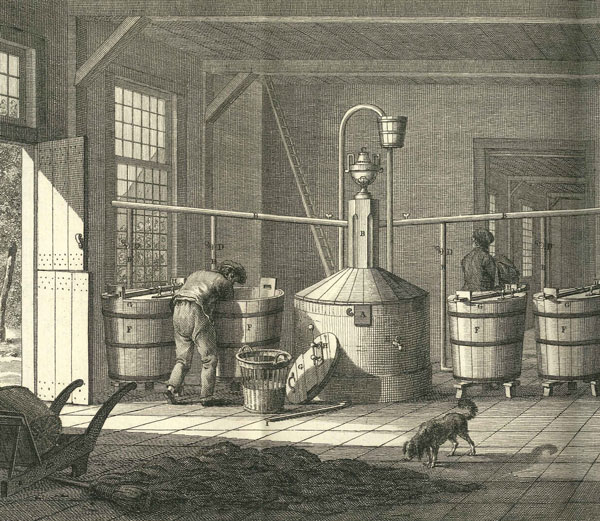 Possibly the author ‘F. Jellinghaus’ is Frans. Another possible author is Frans’ son Frederik, who must have been about 18 or 19 years old. Perhaps he was an apprentice in his father’s business? Frederik became a cloth dyer by profession and in 1845 he received a permit for a steam engine for a dyehouse at ‘de Zooi’ in the Tilburg district De Veldhoven. After Frederik’s death, his dyehouse was sold to a Rotterdam merchant in 1856. Whoever this mysterious ‘F.’ might be, he certainly left his mark. Today, Tilburg Noord still has the Jellinghausstraat on the industrial area Kraaiven.

Photo: The handwriting of the so far unidentified author F. Jellinghaus

Curious about the paint recipe books?

Read here the blog of intern Semma Raadschelders about the workshops in which the paint recipes from the manuscripts were tried out. And here you can read more about the larger project.